This week has been all over the place. On Monday, I went to an exhibition of varying beauty products from Forever Living. Not that these products are of particular great interest to me personally, but as a few friends of mine were attending, I figured “why not?”.

On Tuesday, Anna came for a visit. We had a few snacks, before becoming so tired we nearly fell asleep. Oh well.
On Wednesday, I went to Cathrine’s place, as I tend to do on Wednesdays.

Thursday wasn’t all that eventful, whereas yesterday, the sun was shining! For real! As it is today as well. I couldn’t be happier. So I went for a walk yesterday, had to deliver a few books back to the library, before I hit McDonald’s, and I even ate outside! In March. Then I walked home. So lovely. I hope the sun stays for a while *knock on wood*.

Today I am going to a celebration my grandparents’ 50th anniversary. 50. Wow. Then tomorrow, I hope the weather stays nice, so that I can go outside. That’d be great. 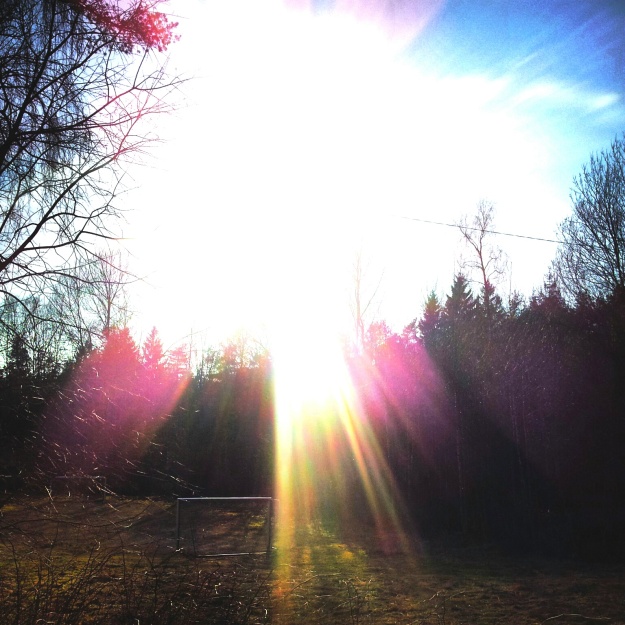 Picture from when I was out walking yesterday.

Hey! You still there?

It has been forever since last time, and the reason why is that I have been busy doing nothing. At least, for the most part.

Last Friday, a week ago, I went to town with a few girlfriends of mine. We had a great time. Obviously, being the people we are, when Anna, Cathrine and I were located at the train station, we almost – still – managed to miss the train, so we had to practically run after it. Lucky us, it stopped so that we could get on, and the staff didn’t appear irritated with us.

The day after, I went to Oslo with my mother. Initially, it was only supposed to be me and her, but my brother and father went on their own little trip to Oslo as well, although we didn’t spend time with them. Turns out, the restaurant at which my brother apprentices, went bankrupt, so he is between jobs at the moment, therefore he needed a little pick-me-up.

Saturday consisted in shopping on me and my mom’s part. I bought some make-up, a pink crocheted sweater, a light blue skirt, a light blue shirt and a white t-shirt with flowers in gold. I wore said t-shirt with a black skirt to dinner later that evening. Having checked in to what is arguably the finest hotel in town, we also went to the town’s finest restaurant, in which we had a delicious three-meal dinner, and went for a couple of cocktails later, in which case we had a run-in with my father and brother, who were on their way back to the hotel at which they were staying, from dinner and drinks at an Irish pub of sorts.

On Sunday morning, my mom and I had an exquisite hotel breakfast, where the only downer was me managing to spill tea on my brand new skirt, so I had to toss it into the laundry basket the minute I got home. Typical.

This week has been pretty uneventful, except I have gotten some more shopping done. I bought a blue and white striped skirt, a similar jacket, and similar t-shirt (sue me, I love that pattern, leave me alone). Then I have also bought a couple of dresses, one being a retro dress, ’50s style, light green with red flowers on it. It fit me perfectly, and I adored it, even though it doesn’t appear like something I would usually buy. It’s fun breaking patterns, and springtime is a great season for just that.
The other dress that I bought, is a casual sundress, champagne pink with flowers.

As far as college goes, we had a book exhibition the other day. We were divided in groups, and the theme of our group was “Pride and Prejudice with adaptions”, as no less than two people in our group are vehement Austen-fans. I think it turned out pretty neat, if I dare say so myself. Wish I had some pictures to show for it, to be honest. Our major is such a theoretical one, it’s fun when we get to do something practical for once.

I don’t actually have any plans for this weekend, so I guess I will just be staying at home, drinking wine and watching TV. And hey, there are far worse ways to spend it!

See you around, hopefully sooner than later.